This new Assault Squad game brings significant game engine and visual improvements as well, with special attention paid to ones that were highly requested by the players. These included items such as advanced multi-core support, advanced shader technology, interface and AI improvements, as well as added camouflage depending on season/map, fully updated inventory items with new graphics and updated vehicles, sound improvements, Steam multiplayer and much more.

The game is available for pre-order on Steam starting from January 9th 2014. Pre-order offers a 20% discount and an additional 10% off for all Men of War: Assault Squad users.

The original Men of War: Assault Squad took place across the globe during the height of World War II and featured five different armies each with their own unique units, vehicles and abilities. The game also included the unique “direct control” feature which enables players to maneuver units using the directional keys, rather than pointing and clicking. PC Generals can get behind the controls of a tank to smash through obstacles, crush soldiers under its tracks and fire armor-piercing shells at enemy emplacements, or take control of individual soldiers as they fight. More information about the game can be found at Men of War: Assault Squad 2. 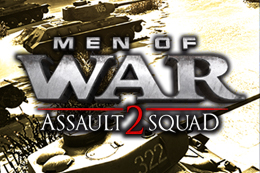