Ice and Fire is the official DLC to the released in 2012 King’s Bounty: Warriors of the North.

The game is now available with 10% discount on Steam. 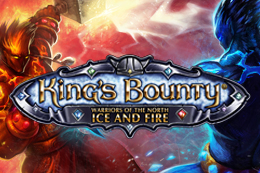