1C Entertainment is excited to announce that Devil’s Hunt, WRATH: Aeon of Ruin, Ion Maiden, Fell Seal: Arbiter’s Mark, and a new unannounced title will all be playable at PAX East 2019!

Let’s dive a bit deeper into the playable games at PAX East 2019.

Devil’s Hunt
What’s it about: The upcoming hack 'n slash from Layopi Games puts players in control of Desmond, a man who has it all but falls to ruin. Staking a deal with Lucifer, you become an executioner but are soon conflicted with the weight of choice, and the greater impact your decisions may have on the cosmic balance of angels and demons.
What’s playable at PAX East: Exclusive 15-minute demo with updated combat, animations and graphics. Get ready to battle demons and epic bosses as well as solve puzzles in a brand new, Hell-based level.
Steam link

WRATH: Aeon of Ruin
What’s it about: 3D Realms, creators of Duke Nukem 3D, Prey, and Max Payne, presents a hardcore first-person shooter, powered by the legendary Quake-1 Tech. Crafted by the hands of Quake-scene necromancers, WRATH is the real deal. You will not survive…
What’s playable at PAX East: Exclusive first public demo showcasing the second level of the game “The Mire” full of action, zombie cutting, and old-school shooting. Be one of the first people to experience WRATH!
Steam link

Ion Maiden
What’s it about: 3D Realms are excited to team up with Voidpoint to bring back the legendary Build Engine, famously known for classic first-person shooters like Duke Nukem 3D, Shadow Warrior, and Blood. Players are Shelly “Bombshell” Harrison, a bomb defuser, set on a crusade to take down the Heskel Army.
What’s playable at PAX East: Explosive and terrifying level “Heskels House of Horrors” that is now available in early access on Steam.
Steam link

Fell Seal: Arbiter’s Mark
What’s it about: Fell Seal: Arbiter's Mark is a turn-based tactical RPG with a focus on storytelling and strategic battles. Strongly influenced by games such as Final Fantasy Tactics (original and Advance versions) and Tactics Ogre, this tactical RPG stands on its own as a worthy successor of those classics, bringing a slew of improvements and additions to the tactics genre.
What’s playable at PAX East: Most recent early access build that will allow you to try the game out from the start of the campaign.
Steam link

Unannounced Title
What’s it about: Embracing its grid-based, dungeon crawling RPG roots, this game offers players an evolution of one of gaming’s most beloved genres, all wrapped up in cyberpunk goodness.
What’s playable at PAX East: Be among the first (literally!) to play the game.

1C Entertainment is also partnering with ASUS to power their PAX East play experience with a full computer setup for each title on display during the show. 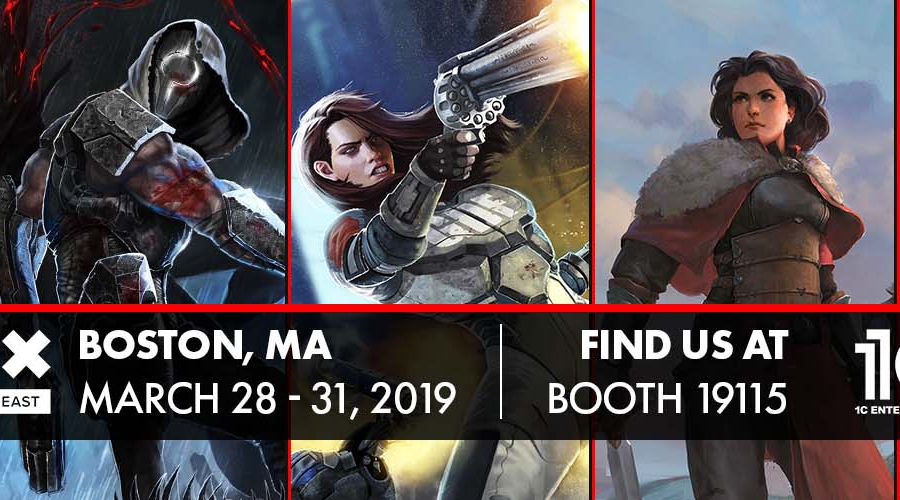