IL-2 STURMOVIK: BATTLE OF STALINGRAD OUT IN SEPTEMBER

“Our team is approaching a very important stage of development – we’re almost at the finish line. Before this point we only had a draft, a rough version with basic elements of gameplay. By the time the beta starts we should have the majority of content ready, it will be a full-fledged game at that point,” said Albert Zhiltsov, producer of IL-2 Sturmovik: Battle of Stalingrad. “We plan to dedicate the remaining months to optimization and bug fixing. The game has been in the early access stage since November 2013. This spring we opened up access 24/7 and we have been producing weekly updates for the past several months, which means releasing a new game every seven days. This is not the most efficient option for a development team, but this gives us a unique and valuable opportunity to get feedback from users before the game hits stores.”
The official IL-2 Sturmovik: Battle of Stalingrad web store now offers a Special Deal – visitors can now purchase not only the Premium version of the game, but a Standard edition as well. Special early-bird discounts for both versions are valid till June 18th 2014. For additional information please visit  www.il2sturmovik.com.

IL-2 Sturmovik: Battle of Stalingrad is a combat flight simulation dedicated to the Battle of Stalingrad, one of the most decisive and fierce battles on the Eastern Front in WWII. This new project from 1С Game Studios represents the next generation of combat flight simulations with the latest development technologies – from a new higher level of physics modeling, damage modeling and aerodynamics to modern modes of gameplay with detailed, immersive environments. 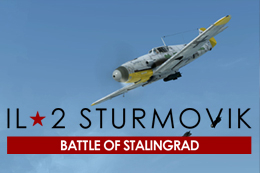